Sign up to make a scene or music for Cast Away! 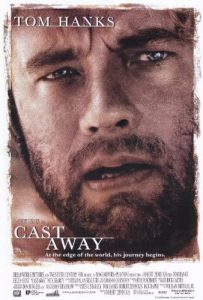 Project launches: Sign up to remake a scene from the movie Cast Away! You and/or your team will have all summer and early fall to remake your one-to-four minute scene. Bands and individual musicians can sign up to make music for the soundtrack. You must own the rights to all music.

Teams can check out all the available scenes any time before registration opens, and will then be able to sign up for a specific scene starting at 5:00 pm on Thursday, July 16th. The scenes will be allotted to teams on a first-come, first-serve basis.
Please stick to the total running time of the scene you are assigned. Going over or under a few seconds is fine, but keep in mind your scene is a small part of a long movie. Make sure the beginning and end of your scene matches up closely to the original so it will transition nicely with the other scenes.

October 15th
Scenes and Music Due
When you’ve shot and edited your scene, upload it using the “Submit Your Project” link at the top of this page. Staff will confirm receipt.
Late Fall 2020
Premiere

During normal times, Crowdsourced Boston is screened in person at the Coolidge Corner Theatre in Brookline. While we hope that will occur, we’ll keep you updated if a public gathering will permitted this year due to evolving conditions of Covid-19. We’ll otherwise premiere the film online or an an outdoor location at a date TBD in the late fall.

What is Crowdsourced Boston?

Crowdsourced Boston is a public art project led by Brookline Interactive Group in eastern Mass, shared from the original Crowdsourced, created and managed by Northampton Open Media in which the community collaboratively remakes a famous film. This summer, we will recreate the classic Tom Hank’s film “Cast Away” in Boston as NOM creates their version in western Mass.
Each team is assigned a scene from the film to interpret creatively – it could be filmed with live action, animation, remix, puppetry, and other visual styles. Scenes should contain similar dialog, action, and run time, though there is some wiggle room in those aspects as well. We encourage teams to look at the film with new cultural eyes, which may mean revising swears in the script or rethinking cultural norms. Scenes cannot contain any copyrighted images or audio.
The final film scenes are edited together, color corrected and normalized and we screen the film at Coolidge Corner Theatre in celebration in November! (and with a costume contest for the screening!)
Teams and individuals can sign up now to participate! Scenes will be handed out on a rolling basis until they are gone, but we also have a waiting list on which we will put additional teams in case there is a team that must drop out.
We are also seeking musicians and composers to contribute new music to our remake! Since the original film soundtrack is copyrighted, we will need new music for several scenes.
Scroll back to top